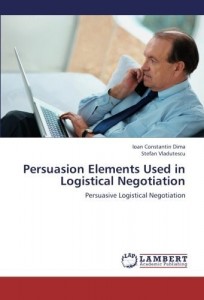 I.Published on 2012 at a prestigious publishing house  Saarbrucken, LAP Lambert, „Persuausion Elements Used in Logistical Negotiation:  Persuasive Logistical Negotiation” book, by professors  Ioan Constantin Dima and Ştefan Vlăduţescu is in itself an event  for scientific domain of psychological persuasion and using it as a tool in logistical negotiation.

II.The study is interdisciplinary and the confluence of leverages confers good instruments for thos who read it in the negotiation  (if this is what we call communication – permanent negotiation, for a transient purpose or for a durable one) of various subjects of knowledge. Mastering the calm of communication and thus solving our environmental interactions, we gain time that, in a shallow unpredictable and immutable life, means a lot – that is, a favourable state where we have the opportunity of meditation and living inside one’s self. For a success, the persuasion entails games of emotion and reason and by expozing us to the touch, we arrive to manner. The speakers estimate our communicatinal use and according to the way in which we impressed them or not, they seek our company and implicitly to be of help in solving problems.

The first chapter is entitled  Truth and Verisimilitude;   the relationship between conviction and persuasion is developed. The former element appears as a purpose, the second, as an action of exerting some personal skills within a dialogue.

In the second chapter  it is issued the thesis  that persuasion is accomplished through four operations: “lies, myth, fiction and seduction”. Furthermore, persuasion is illustrated as a form of influence in actions and influence operations such as: intoxication,influences, propaganda, desinformation, and manipulation”. The terms, even as similar semantic purpose, assign different group mentalities in whose acting is involved power distribution, with application directions on society, according to voluntary or not of individual receiving.

The present study is placed on the interaction of communication persuasion and the logistic negotiation. The contrasts, experienced by any individual when participating in a dialogue, are highlighted and classified accordingly by origin of elements that have generated them.

The third chapter,  the logistic functioning of a company and places – manners in which persuasion intervenes in the development of logistical negotiation – are presesnted.

The fourth chapter,  „thesis of persuasive feature of any logistical negotiation” (Dima I. C., Vladutescu S., 2012, p. 312) is issued. To support this thesis psychological, logical, experimental arguments along with arguments of specialist in the field are brought. The decisive experiment is conducted on twenty subjects who face salesmen that practiced imposture features.

The revealing conclusion is that  „the persuasive character is among the defining features of the logistic negotiation” (Dima I. C., Vladutescu S., 2012, p. 339).