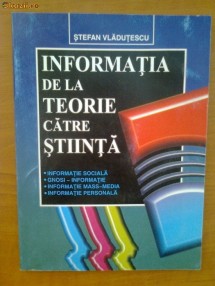 In the last decades, more scientists were concerned about communication, what, how, whom, why are we communicating. Which are the differences between communication, information, message, which are their common points? It is necessary to interpret/decode messages to get information? Have the codes a role in information transmitting/receiving? More of answers at these questions we can find in Ştefan Vlăduţescu’s book “Information from theory towards science” (Editura Didactică şi Pedagogică, Bucureşti, 2002). S. Vladutescu asserts: “Information same as mother tongue, is learnt theoretically after already we know it. To assimilate the mother tongue grammar, anybody can’t contest, suppose to dispose already of “grammar” language, the respective language already we speak it. The grammar thus appears as a theory of speaking. For information all of these are available, as a matter of fact for any current activity. First of all, we have some ideas about how it has to be done a thing without a too clearly theoretical conscious and only later is ascertained theory like in a teaching  “learning by doing” (p. 21).

So, information is based on laws, axioms, standards, methods, principles, being an “coherent, cohesive and unitary assembly of gnosis meanings, characterized by news, relevance and utility, referring to status, situations, objects, phenomenon, facts, issues, events or persons. It is not a simple notion” (p.21).

As in each domain that request a theoretically base, also in information domain “logics precedes any experience of fact that something is so and not different (L. Wittgenstein, 1991, p.100). Ştefan Vlăduţescu develops the idea that: “Logics modelates the spirite, and this one the cognitive material. The ampleness and fineness difference between naive representation and scientific representation of information is not coming from the fact that naive individual would be referred to a naive reality, and the scientist, to a scientific one. Of course, not. The innocent sees the reality as scientist sees it, but the last has the advantage of not ignoring of a different perception. Who knows what is perceiving, has a better perception supported on idea and conscious of perception” (p.23). The concept from naive is inconsistent, that one from scientific representation is efficient and offensive. The cognition through concept is “the royal way towards science” (Hegel, 1965,p.46) and it has to be followed.

After a rigorously analyze of appeared themes and  ideas appeared concerning communication, the author asserts: “communication appears as the process and the result of interaction that points a goal, takes place direct or indirect, synchronously or asynchronously, between two or more persons and which consist of messages changing, having as object the transfer of meanings as ideas, information, thoughts, feelings etc” (p.29).

A seriously research has to start from a model, a structure which to make sense of scientific investigation. In communication and information history were remarked more models. Starting from a practical issue appeared in communication on telephones lines, Claude Shannon and Waren Weaver defined a “communicational” model among which it would be represented any communication system.

This model was interpreted by linguists such as:

“A certain source has to transmit a message. According to this purpose, it has to code it (to give it a transmissible form, objective, perceptible), action made by emitter. The signal, the coded form of message, is transmitted to destination through a channel. Here it is exposed to be damaged by the influence of noise, perturbations. At last, the signal is decoded by a receiver and arrive to destination as message” (p.39).

Information is a product destined consumption. “Nothing is produced random. The constrains that take into consideration information producing speak about themselves about “conformist” side of product and production, about the circulation to whom is destined in order to be arrive in consumption space: that of intentional receptions (receivers, arhireceivers, pointed observers) and of involuntary receptions (observers without producer volition)” (p.60).

To be treated as science, communication/information needed some regulations, so the author explain this aspect: “always essential utterances will be encountered with doubt and treated with autotelic adequacy, neighbor with indolence and the way to escape to refuse. They need allocation of great gnosis resources of proceed and constrain to a concentration for which almost never we have not enough time to allocate. However, essential utterances, as well laws, axioms, postulates, theorems and principles, facilitates logical thinking and underlies of great economy of intellectual effort. If in exact sciences an essential utterances usual,  in socio-human sciences appealing or invoking of one constitutes an attack against common sense trust storage” (p.95).

Communication axioms idea belongs to Palo-Alto School became symbol. Intention to establish a “logic” or “grammar” of communication according to some rules and rigid concepts, but also presentation within programmatic study, Pragmatics of Human Communication (performed by  Paul Watzlawick,  Janet Beavin Bavelas and Don D. Jackson) of a communication definition through an axioms system, a set of five general laws constituted support assertions concerning an approach strictly rigid at its beginning, but these open the perspectives of a general approach. Axiomatic model of communication, developed by members of “invisible college” has not to be interpreted without its context, and its context is that one of a pragmatic perspective, of interdependence between terms “communication” and “behavior”. First axiom of structure of five, enunciated by Watzlawick, Beaven and Jackson constitutes in fact the fundament of whole theoretic construct of the “new communication” performed by representatives of Palo-Alto School: “One can not not communicate”. Having at base the Bateson’s perspective, who considered communication as “matrix in which are registered all human activities”, or much more a cover of  bios in which can be joined, theoretically disciplines, apparently disparate, Watzlawick constructs premises of a perspective on communication as totality.

The book “Information from theory toward science” by Ştefan Vlăduţescu, reveals a strong analytic power of information and communication theory as well a deep understanding of mechanisms, processes through which information is produced, is selected, is proceeded, is transformed, is consumed.